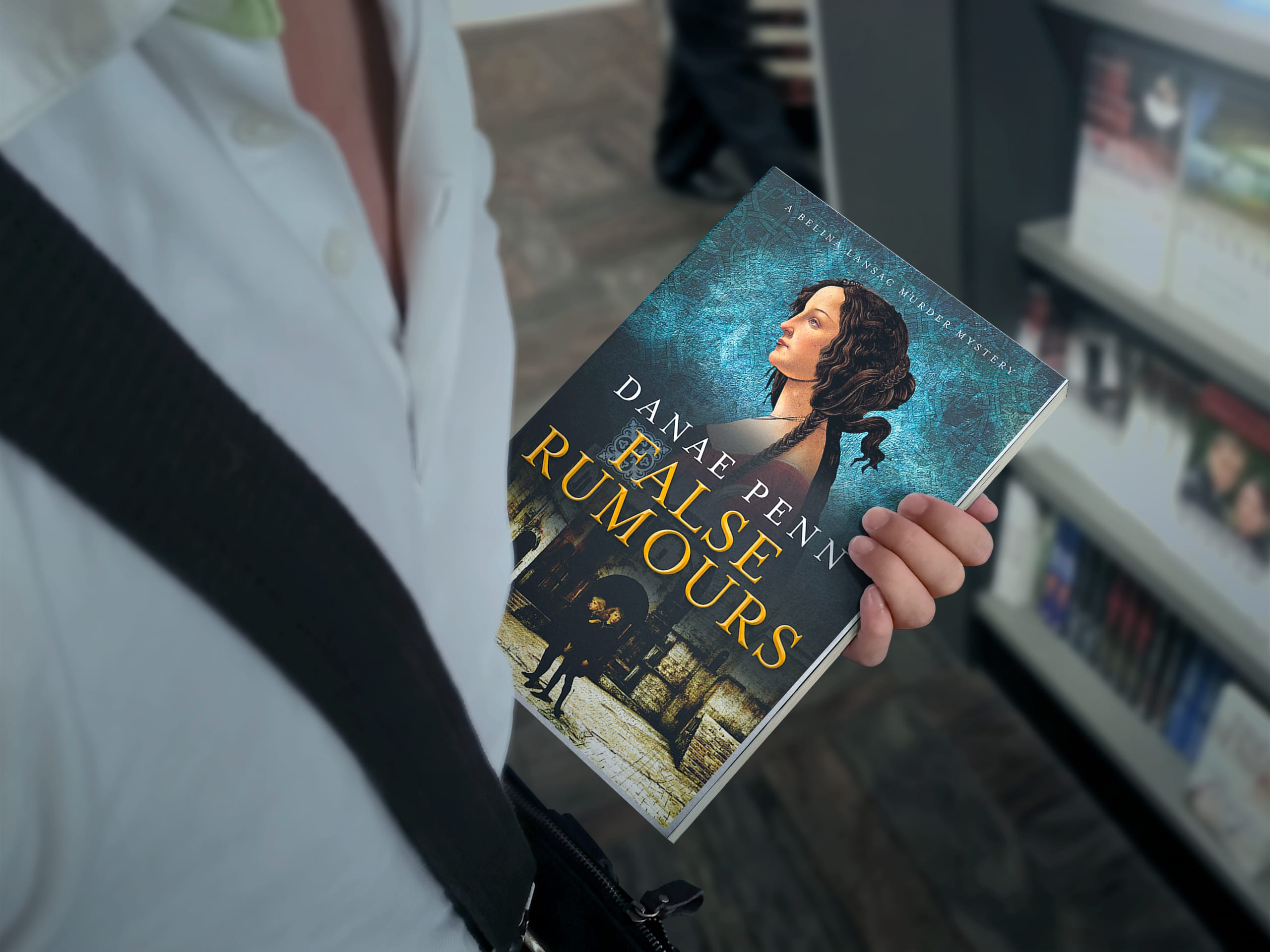 T he storm broke when Belina was waiting her turn in the apothecary’s store. To curb her impatience she gazed at the porcelain jars on the shelves, trying to decipher the Latin scripts on them. Everyone jumped at the sudden clap of thunder and the apothecary spilt the arsenic he was transferring on to a tiny cloth square lying on his poisons scales. He cursed and began again…

The storm broke when Belina was waiting her turn in the apothecary’s store. To curb her impatience she gazed at the porcelain jars on the shelves, trying to decipher the Latin scripts on them. Everyone jumped at the sudden clap of thunder and the apothecary spilt the arsenic he was transferring on to a tiny cloth square lying on his poisons scales. He cursed and began again.

A small man in a physician’s red gown pushed his way to the front of the line, elbowing Belina aside. “Dame Senclar is waiting for her medicines. Hurry. Serve me first.”

The apothecary took no notice of the man and continued to weigh out two ounces of crushed arsenic for his customer’s rat poison.

The physician banged his fist on the counter so hard that everything upon it bounced. The blacksmith in the doorway growled. So did his dog.

The apothecary looked up at the man. “I have already spilled this arsenic once, and I do not intend to do so again,” he said. “You will wait your turn.” He finished concocting the rat poison and looked towards Belina, “Dame Lansac, what can I get for you?”

The physician scowled at Belina. “Young women should never drink aygue ardente. Dame Senclar would disapprove of you buying such firewater.”

Belina stared at him and refrained from answering, well aware that she dare not deliberately offend the richest landowner in Condom.

Rain began to lash the cobbles outside the store and the crowds of Saturday shoppers ran to take refuge inside the cathedral. Belina paid her bill and followed them in, holding up the skirt of her tunic and taking care not to be pushed against the heap of rubble piled just outside the doorway.

It was dark and very noisy in the nave, with everyone complaining about the storm and how it would ruin the grapes. Pilgrims wandered around, glancing at the side chapels, deciding whether or not to spend the night in one of them. Several pilgrims had spread cloaks on the floor and were drinking wine from their gourds while discussing what to do next.

“This is the worst summer I have known for a pilgrimage,” declared a wiry, sunburnt pilgrim, “and I have been walking the Way of St James for over fifteen years.”

“Have you committed that many crimes?” asked a passing chorister.

“Don’t be cheeky. I walk to Compostela every year because I’m paid to by people who have inherited such an obligation. Instead of wasting four or five months going to Galicia and back they pay me to fulfil the vows of their ancestors.” He drank from his terracotta flask and hooked it back on to his belt. “And to pray for them,” he added. But the chorister had already disappeared into the vestry.

Belina looked at the pilgrim’s flask, admiring its engraving. She was about to ask him where he had acquired it when a hand reached out to grab one of the newly bought aygue ardente phials in her basket. She thumped the hand, turned and stamped on the thief’s foot.

“I was only looking,” the thief whined, withdrawing his empty hand.

“Then look with your eyes, and keep your hands to yourself,” Belina retorted. “If you want to buy some it will cost you two sous.”

He tried to bargain with her, but she was adamant. The cathedral treasurer set the price and she was forbidden to lower it. The unsuccessful thief cursed the treasurer and limped away empty-handed.

Belina held her basket close to her damp tunic and watched a group of pilgrims shuffling from one side-chapel to another, praying before each statue. Their progress was hampered by the cloaks spread out on the floor near many of the statues, but no one was dropping alms into the coin boxes placed prominently in front of each chapel. Until March that year the coin boxes had been smaller and less obvious. Rocca, the new Treasurer from Paris, had changed that. All the cathedral staff had received orders to keep their accounts up-to-date and to submit their ledgers to Rocca’s assistant, Loupmont, every Wednesday afternoon. Quiteira, Belina’s colleague in the cathedral shop, could read but not write so Belina had to find time to comply, grudgingly, with Rocca’s orders.

She edged her way through the crowd of pilgrims, avoiding the wine gourds swinging from the tops of their staffs, and joined a group of local shoppers and street tradesmen who were shouting at each other about the demonstration that morning against fines and evictions. Two ribbon sellers maintained that protesting had done more harm than good but several shoppers voiced loud disagreement. In their view, the French habit of taking to the street to demonstrate was something a Parisian like Rocca would understand. Now that Gascony had become part of south-west France, its inhabitants needed to adopt French ways of behaviour, they said.

Belina stopped listening to the argument and thought about how she would spend Sunday with her husband: getting up late, a quick Mass, and then walking with Guillaume down to the wharf and along the towpath of the river Baïse to the fishponds at Cahuzac. Perhaps they would get further, to the Beauregard mill where long ago her aunt had fed her delicious merveilles to eat while her cousin Christau took her home by boat, letting the current wash them gently down to her grandmother’s mill at Autièges, saving his strength for the more arduous row home. Now she was looking forward to eating those same honey cakes with Guillaume at the end of a special dinner in the Pont Barlet inn, a celebration he had promised for her birthday two weeks ago. His promise had been broken: the Bishop of Condom had ordered him to take an urgent message to Archdeacon Marre in Auch, and Belina’s indignant protests had been brushed aside.

Back in the present, she saw that people were leaving the cathedral. The rain had turned to drizzle. It was a good opportunity for her to walk back to the shop in case the storm returned.

Quiteira had removed all the small objects from the display counter and brought them back inside the shop. She scowled at Belina’s greeting. “You have been a long time.”

“I got caught in the rain and had to shelter in the cathedral. Someone tried to steal one of the aygue ardente phials from my basket.”

“A pilgrim or a soldier?” Quiteira asked.

“Don’t know. Might even have been a local person.”

Belina had had enough of listening to complaints that afternoon. She walked into the inner storeroom and arranged the firewater phials inside the cupboard and the foot balm pots on a high shelf, forgetting the moans of the citizens of Condom and beginning to hum at the thought of spending the morrow in her husband’s company. She went over to the copper basin and glanced at her face in the tin mirror, admiring the aquiline nose and large black eyes which had first attracted Guillaume to her, or so he often told her.

She unwrapped her soggy head-cloth and hung it on the rail. Her glossy dark hair tumbled down her back and she smiled at herself in the mirror. She picked up her empty basket and returned to the shop.

Quiteira was putting on her pattens and grumbling about the muddy street outside. “It’s all right for you, Belina, you live here. All you need to do is cross the courtyard and go up the stairs.” She sighed and flexed her left foot on its patten. “While I have to walk all the way to rue Cadeot. It’s not fair.”

Belina took no notice. Instead, she went outside and began to pull up the shutter. A passerby helped her and then pulled the awning down for her, spattering them both with drips from the storm. Belina’s hair clung to her cheeks and she laughed at the sudden chill touch of the water. Her helper gazed at her with great interest, and Belina supposed that he presumed her unmarried because she was not wearing a head-cloth.

“Thank you so much,” she said with a small smile and walked briskly back inside the darkened shop, colliding with Quiteira.

“Look where you’re going.” Quiteira tried to flounce off down the street, but found it difficult to walk in her pattens on the muddy cobbles. Belina lit a tallow candle so that she could lock and bolt the street door of the shop. She went through the darkened shop to the courtyard door, unlocked it and blew out the candle, wrinkling her nose at the smell.

She locked the door behind her and rushed up the stairs, her mind full of happy plans for the next day.

“For lovers of history, this book will steep you in the society, politics, culture and environment of the fifteenth century of France and Britain. A rich, dense story of cunning machinations, set in a fully realised historical setting, brought to vivid life through the eyes of Belina. Every element from weather to architecture feels authentic and vivid, as if you are stepping back in time. Hence the tension of the plot becomes as real as any detective story. One to absorb slowly and enjoy the attention to detail, before emerging stunned and blinking back into reality.”

“A hugely enjoyable and engrossing story. The detail of this medieval world is vividly drawn and envelops the reader. Belina questions the cooks in a busy household and the reader can smell the aromas, and see the colourful ingredients, in that kitchen.”

“I live in Gascony and read every book that is published about the area. Having walked some of the very medieval streets the main character, Belina Lansac walks, I felt as though I’d become her shadow, experiencing everything she did as she takes over the role of town detective from her husband, Guillaume, who leaves home suddenly under a cloak of secrecy. There’s crime, passion, poison, wicked political scheming and murder woven in between the true, never-been-solved mystery of who killed the Princes in the Tower of London – was it Richard III, Henry VII or Henry VIII?”

False Rumours is available to purchase on Amazon, in bookshops and from Nichol Press PURCHASE NOW