Life five hundred years ago was very different in many ways from now. Think about it. How would you survive without social media, internet, electricity, motor cars, fridge, freezer . . .? However, the late 15th century was a time of innovation because of the invention of printing and the increasing use of paper. In that way, it was similar to the introduction of the internet in our times. Ideas could be exchanged, trade was easier, knowledge of the outside world increased.

Nevertheless, the daily task of cooking food was time and energy consuming. Firewood had to be obtained and lit and managed according to the type of cooking. Cauldrons could sit on a slow burning area while in another zone a fish or an egg could be fried quickly – if you knew how to manage both the cooking and the fire, or had help to do that.

Gascony was already known for its good quality bread. The main dish was garbure, which was – and still is – a cabbage and vegetable stew, simmered with preserved duck or goose or salt pork. It is also the traditional dish of Ecuador. Click here for a modern recipe to make your own garbure.

Everyone kept chickens. Click here to discover how and why they did.

Fires can be dangerous and the medieval housewife had to know first aid (click here for some methods) and she had to do the washing and ironing, or supervise others doing such onerous tasks. Click here to read more

The medieval housewife also had to know safe ways of clothes storage and pest control. Click here to read more

Men went hunting, for sport and for food. Gascony still had many forests but there were laws about who was allowed to hunt where and what Click here to read more about hunting. The rivers contained an enormous amount of fish, but fishing was a commercial task not a sport. There were many days in the year when meat eating was forbidden: every Wednesday, Friday and Saturday; on the eve of festivals; during the forty days of Lent.

Spices were expensive and were NOT used to camouflage meat that had gone off (another 19th century myth). A favourite sauce was called cameline, after its camel-hair colour; its main ingredients were cinnamon and almonds. Click here for a modern recipe. Bon appétit!

All medieval cookery books throughout Europe included a recipe for blancmange (or “blanc megnier”) which was recommended especially for invalids. In the Middle Ages sugar was considered to be a medicine, was expensive and difficult to obtain. Only Edith Senclar ate too much sugar, too often. Click here for a modern recipe for “blanc megnier” which includes sugar, almonds – and chicken breasts.

Boil the beans in a large stewpan for 15 minutes. Discard the water and refill the pan with water until three-quarters full. Add the preserved or salted meat, heel of ham, onion, garlic and bouquet garni. Do not cover the pan. Bring it to the boil while you peel the carrots, turnips and leeks and cut into small pieces. Add to the pan, cover and simmer for one hour. Add the cabbage and potatoes. Continue cooking for a further 30 minutes then season with salt and pepper. Remove the bouquet garni and onion. Serve with toasted slices of brown bread.

They were omnivores. They ate seeds, grass, leaves, soil, insects, rodents, slugs, snails. Also, wheat, beans, lentils (same food as humans ate). Keeping hens was cheaper than keeping geese and they were too small and weak to destroy crops. They helped to fertilise farms. They could be watched over by children. Their average life was seven years. Modern hens lay 300 eggs per year but medieval ones laid less than that. Cocks were castrated, becoming capons, in March or between 15 Aug (Assumption) and 8 Sept (Nativity of Virgin Mary).

In manors chickens lived in lean-to additions to the main grain storage barns, or sometimes in dovecotes with the lord’s pigeons. On smaller farms, peasants kept hens and geese, a few pigs, two sheep, sometimes a pair of oxen or horses. In towns chickens lived outside the house, in the yard, in domed structures made of wattle and daub (interwoven sticks and branches covered with mixture of mud, straw, and animal hair). Peasants took some hens to market, and kept others for their eggs which were cooked in soups, stews, spit-roasted, baked into pies. Old hens were boiled in soup with vegetables. Selective breeding did not start until 16th century.

Washing: powder was made by mixing two cups of sieved ashes in a litre of water; left to soak overnight ; filtered and mixed with boiling water; after washing, sheets etc were rinsed in the river or lake, beating them very hard. In medieval times outer clothes were not washed often, merely shaken and brushed. Underclothes were rinsed frequently and hung to dry over a pole. Woollen clothes with a long nap could be re-shorn when they were dirty (skilled procedure). Soapwort (saponaria) was a medieval detergent.

In medieval times outer clothes were not washed often, merely shaken and brushed. Underclothes were rinsed frequently and hung to dry over a pole. Woollen clothes with a long nap could be re-shorn when they were dirty (skilled procedure). Soapwort (saponaria) was a medieval detergent.

Garments were waterproofed by waxing.

Instructions for stain removal using fuller’s earth soaked in lye: let it dry and then rub stain. Or ashes soaked in lye. Silk soaked and washed in verjuice (acidic juice made by pressing unripe grapes). To remove grease and oil: take urine and heat until warm. Soak stain for two days. Without twisting the fabric, squeeze the afflicted area, then rinse. As an alternative for stubborn greasy or oil stains, soak in urine with ox gall beaten into it, for two days and squeeze without twisting before rinsing. OR: Soak chicken feathers in very hot water and then wet again in cold water; rub stain with these feathers.

Colour was restored to faded garments by rubbing with damp sponge dipped in clear, clean lye.

Clothes were re-hemmed to extend wear and new bits were added to a dress.

Ironing involved holding a flatiron over or in a fire – or on a box containing coals to retain radiant heat for longer – and when it was heated it was picked up by the handle with a padded holder. A thin cloth was placed between the iron and the garment in order not to dirty the clothing during ironing.

Clothes were aired in summer. Sieved rose petals were scattered on them and then the clothes were very tightly wrapped and stored inside chests. Lavender, rue, rosemary, wormwood, iris, valerian, bay leaves, cypress wood were also used.

Fleas were a major problem. Fleas were combed out of hair when the sufferer was standing by an open window. Fleas were caught with flea traps made of alder leaves (crushed like cabbage leaves), made up into cakes like woad. Belina had to wash the cakes, break them up like wax, knead them in running water, put the mixture in a pot and keep the pot well-covered.

Nits and lice also sucked blood. There were several ways of destroying them:

Flies left at dawn through an east-facing little opening in the wall. Other methods of getting rid of flies were:

Ants were killed or discouraged by sprinkling with sawdust from oak planks or by placing an owl’s heart on the ants nest, or dried fish, or a mixture of vinegar and ashes. 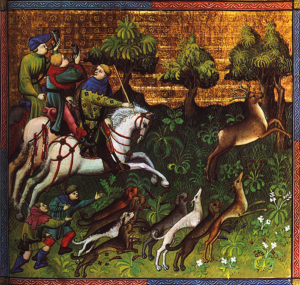 According to a manuscript by Gaston Phebus, there were stags, deer, roe buck, hare, wild rabbit (‘of an idle and roving disposition’), wild boar, bear (‘so timid’), wolf (‘hunted for fur’), fox (‘countryside’s thief’), badger, wildcat (‘hounds frightened of them’), otters caught in nets.

Huntsman training began aged seven. They learnt to make nets to ensnare game. They exercised dogs and trained hounds for the hunt. They learnt to recognise stags by their footprints.

Rabbits were hunted by putting nets over all but one hole in a rabbit warren. A muzzled ferret was sent down that hole and rabbits rushed up their tunnels and into the nets draped over the holes.

Animals were shot with bows and crossbows. Carts were camouflaged with leaves, with huntsmen inside the carts and on top of them. Cart wheels were deliberately made squeaky so that all other noises were masked.

Hares were caught in nets set before dawn to catch them on their way back to their warren in the morning. Nobles were against the cruel snares that were used by peasants.

This is a cold sauce, not prepared by boiling, and served cold. Sometimes garlic is added to it.

Soak the raisins in warm water for an hour. Grind the almonds finely in a blender, add 60 ml warm water and continue blending until thoroughly combined. Strain through a fine sieve, pressing with a spoon to extract the maximum possible almond milk. Moisten the bread with a little water and let it stand until softened. Puree the raisins in a blender, together with the spices and the bread. Add the almond milk, then the verjuice. Blend until well combined, then add a little salt; taste for seasoning. This should be quite a loose sauce, of a strong tan colour.

Vinegar and verjuice, or verjus, (which was made from unripe grapes whose juice and seeds were preserved in salt) were flavourings of paramount importance in medieval cookery and could be kept in store for several months. Cooks also used young wine, produced within the past year.

Place the chicken breasts in a large saucepan and cover with the water. Bring to the boil and cook for 3 minutes. Remove from the heat and allow to cool with the lid on for 1 hr 30 mins. Drain the chicken breasts and mince them. Add to the liquid in the pan: ground almonds, creamed rice which has been diluted with some of the liquid from the pan, the minced chicken breasts. Cook on low heat stirring all the time until the mixture is thick. Divide it into two parts, and cover one part with almond slivers and the other part with pomegranate seeds. Sprinkle with sugar.

This form of blancmange (or “blanc mengier”) was described in all medieval cookery books throughout Europe and recommended especially for invalids. In the Middle Ages sugar was considered to be a medicine, was expensive and difficult to obtain. 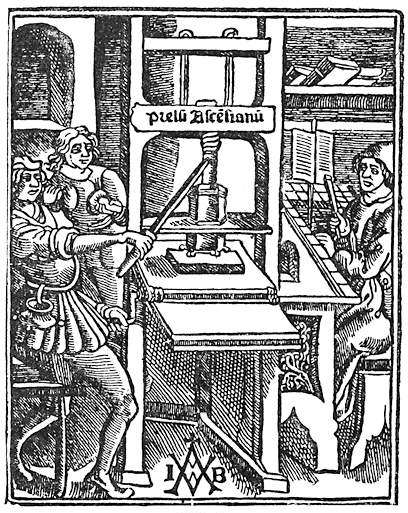 False Rumours is available to purchase on Amazon, in bookshops and from Nichol Press PURCHASE NOW